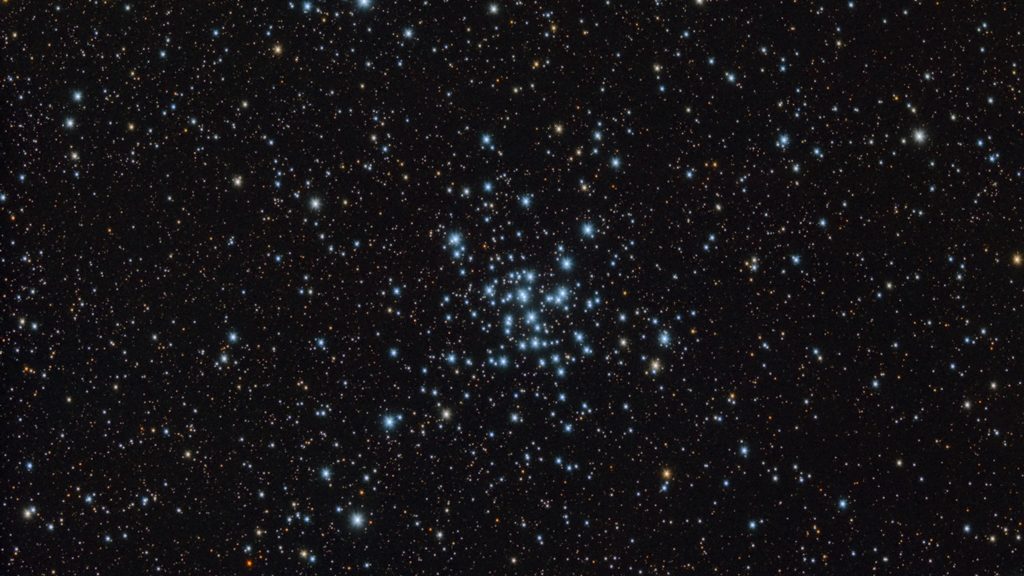 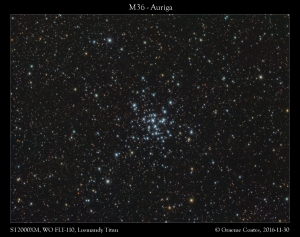 M36 is one of the three bright open clusters in Auriga. It was catalogued by Charles Messier on the night of 2nd Sept 1764, though it had been previously discovered at least 110 years prior to this by Italian astronomer Giovanni Batista Hodierna. Despite being one of the fainter open clusters in Messier’s catalogue (though M38, also in Auriga is the fainter of the three), it is visible with the naked eye from a dark site.

There are about 60 stars in the cluster itself at a distance of about 4100 light years. It is very similar in extent to the Pleiades, and if it was at the same distance, it would likely appear just as bright!

In this image to the lower left (south west – north is to the right here) there is the deep red variable star OW Aur. This is another carbon star, similar to V358 Aur as imaged near to M37.

The data presented here was taken on the evening of 30th Nov 2016 as an opportune target while waiting for another object to be in a favourable position. As such, exposures were fairly short, totalling 45:40:40 R:G:B (all unbinned, 5min sub exposures). Reduction/processing was performed in Pixinsight with final tweaks in Photoshop. During processing in PI, I generated a pseudo-Luminance frame from the combined RGB data and then merged this back to form the LRGB image shown. 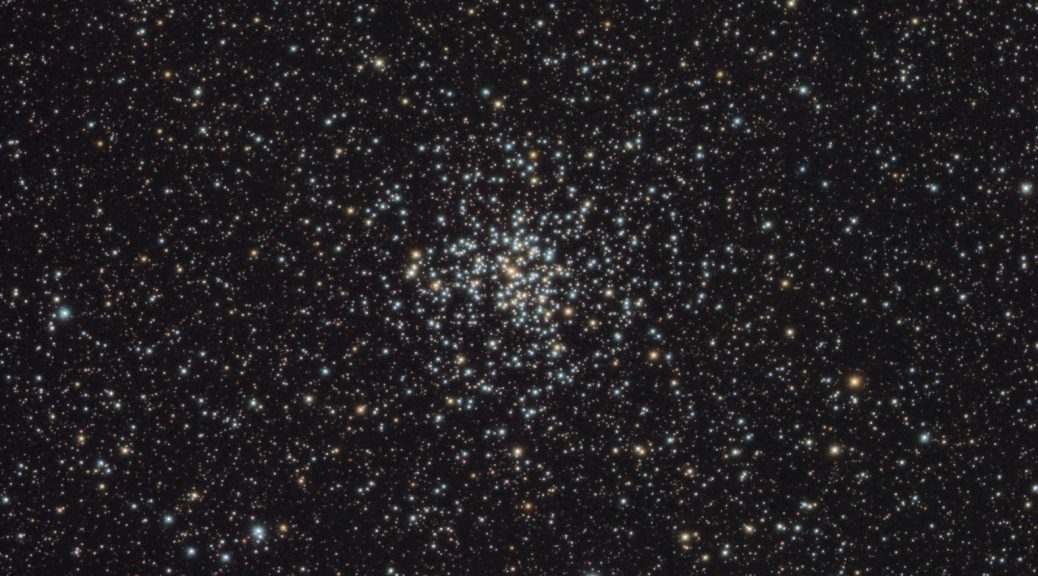 I took a short set of subs late at the end of an imaging run on the Bubble Nebula, concentrating on the open cluster M37 in Auriga.

As it was so late, images were restricted to RGB 35:35:35 (all 7x5min subs) unbinned at 1×1, though I find I get better star colours with RGB only processing. They were processed in Pixinsight as the first RGB image I’d put through it – while there was a bit of getting used to the order of the processes required and the methods of colour balancing and combining, I think I managed to get the result somewhere near to what I was after, while also preserving star colour in what is quite a rich open cluster. 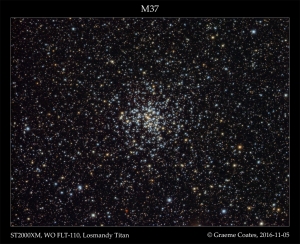 To the bottom (centre-left) of the frame, there is a particularly red star which is the irregular variable star V358 Aur (Magnitude V 12.2, R 11.4). This is a carbon star (ie class C), which are cool (often giant) stars with dominant absorption lines from C2 molecules (the Swan bands), as well as absorption features from other larger carbon compounds. These compounds give the outer atmosphere of the stars a “sooty” makeup and a striking red colour. 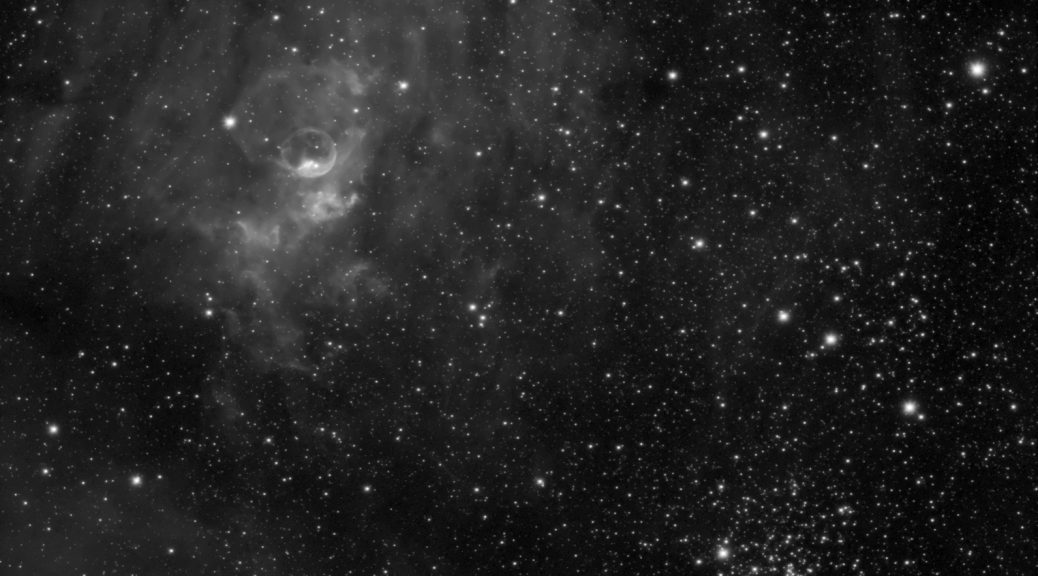 The past few months have seen some changes to my equipment – unfortunately the biggest (or most expensive) change was due to my original Gemini 1 controller dying. The mount is back in action after I upgraded to a Gemini 2 from Losmandy via an existing owner trade-in. Good news is that the mount appears to be working well, though still needs PEC sorting and full building of pointing models.

I’ve also got a 0.8x reducer/flattener for the William Optics FLT110 (this is the latest model of the William Optics FLAT4 reducer), allowing me a larger field of view on the SBIG ST2000X, a flatter, faster field, and also the ability to mount a recently acquired, astro-modded Canon 350d on there as well – I look forward to trying to image the Pleiades and the Orion Nebula using a sensitive, wide field arrangement this winter… I also have started to use Pixinsight for processing images; while it’s been a learning curve for me, I feel I’m starting to get somewhere in using it, and think it could be a very powerful tool. 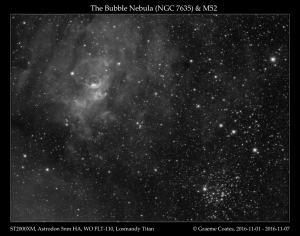 I have managed to put the new kit to use already: after tuning the spacing for the CCD camera, I managed to take a lot of sub-frames of the Bubble Nebula (NGC 7635) and M52. The image shown is in H-Alpha (using the Astrodon 5nm filter) and consists of 7hrs total in 20min subframes (at -20C).

The Bubble itself is a large  (~7 light year) void formed by the action of the fierce stellar wind from a hot, highly luminous Wolf-Rayet star. This star also causes excitation of the surrounding nebula, giving us the H-Alpha light we image here. M52 is the open cluster to the bottom right, with Czernik 43 the slightly looser open cluster to the right of the image. The nebulosity to the bottom left is part of the larger region SH2-158, and the smaller areas of nebulosity to the top centre-left of the frame is the not often referenced planetary nebula KjPn8 (though this is quite faint here and needs a bit more magnification, and a lot more data to pull out well!) 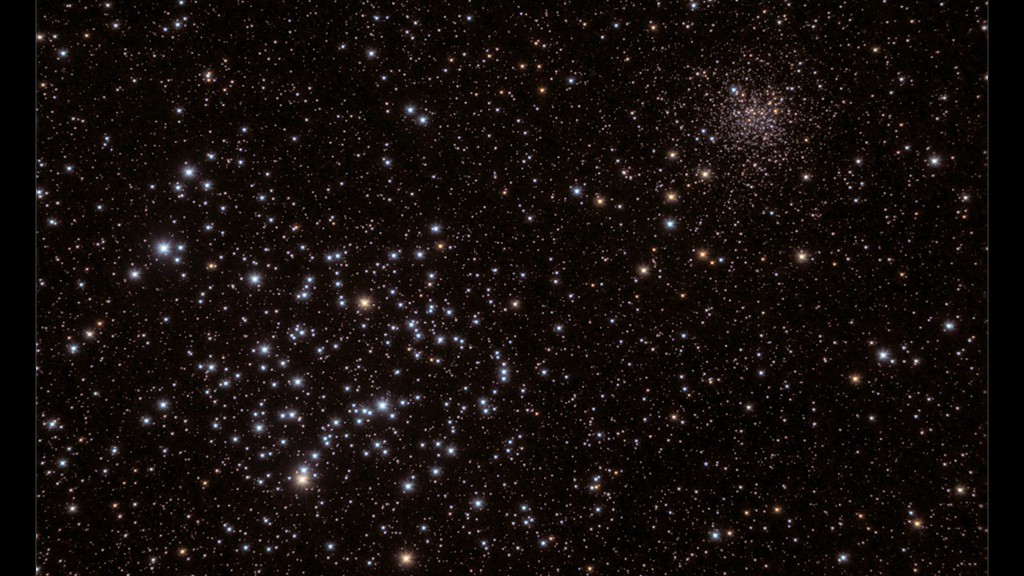