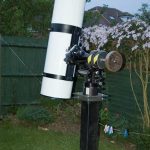 In my home observatory, I have a 14″ Newtonian telescope permanently mounted on a Losmandy Titan. I’d originally bought an Orion Optics SPX350 second hand in 2006, with the intent of replacing my 12″ LX200 with something with a shorter focal length for imaging.

In order to get the scope working as an effective CCD imaging scope, I needed to swap the focuser for one that was accurate enough and could be motorised to allow for automated focusing, and this resulted in a Moonlite CR2 being fitted. While the focuser was very good, it only went on to show shortcomings in the tube itself and the inability to get the scope collimated easily.

After a long time, I rebuilt the scope in its entirety, and with some help from friends, constructed a double truss telescope using the original primary mirror and Moonlite focuser with a new larger secondary (89mm minor axis). 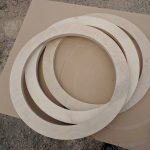 Construction started with the three rings (two for the secondary cage and one for the mirror support) which were routed out of 21mm Baltic Birch Ply. Internal diameter is 390mm. 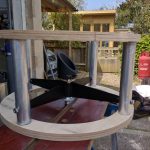 The secondary cage was constructed and measured to provide the measurements for a custom made spider (by Klaus Helmi). The secondary cage is bolted together by two countersunk M10 bolts that screw into star inserts inside the 4 connecting 1.5″ pipes. The star inserts were from Jetpress and can be found here: http://www.jetpress.com/Products.aspx/otelfxlw12/TubeConnectorNuts/ (it took me a while to find something like this). 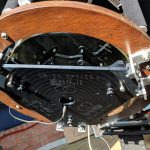 Onto the remaining ring was mounted a new Orion 9 point primary cell (to replace the naff original 3-point cell) – some small aluminium angle pieces do the connections between the cell an d the ring.

The connectors to mate the aluminium tube to the various ply rings were made by a friend with an interest in hobby machining – these would have taken an age to make by hand and would have looked nowhere near as nice – the detail of the connectors is shown below. 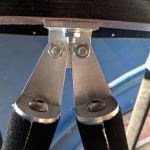 Within the tubes are the same star insert with internal thread to allow the hex bolts to screw into and provide a firm connection between the connectors and the aluminium tube itself – installation was done using a star nut insertion tool which is otherwise used for installing new forks onto bicycles.

At this point, testing allowed me to determine if the initial estimates for tube lengths were correct – as expected, a little bit of further milling was required to shorten the trusses to allow the CCD camera with coma corrector to come to focus. (This was expected, but better to be too long rather than too short!) 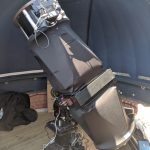 Finally, to attach the scope to the we milled a custom dovetail for the scope conforming to the Losmandy “D” size using a 60 degree cutter – this was subsequently drilled and tapped and bolted onto the central brace portion.

Final work on the mount included adding shrouds (which were custom made by Heather at Scope Shrouds) and also mounting a power distribution block and PC on the scope itself to reduce the number of wires going to the scope down to two (both power – one for the PC/fans/focuser, and one for the SBIG ST2000XM CCD camera).