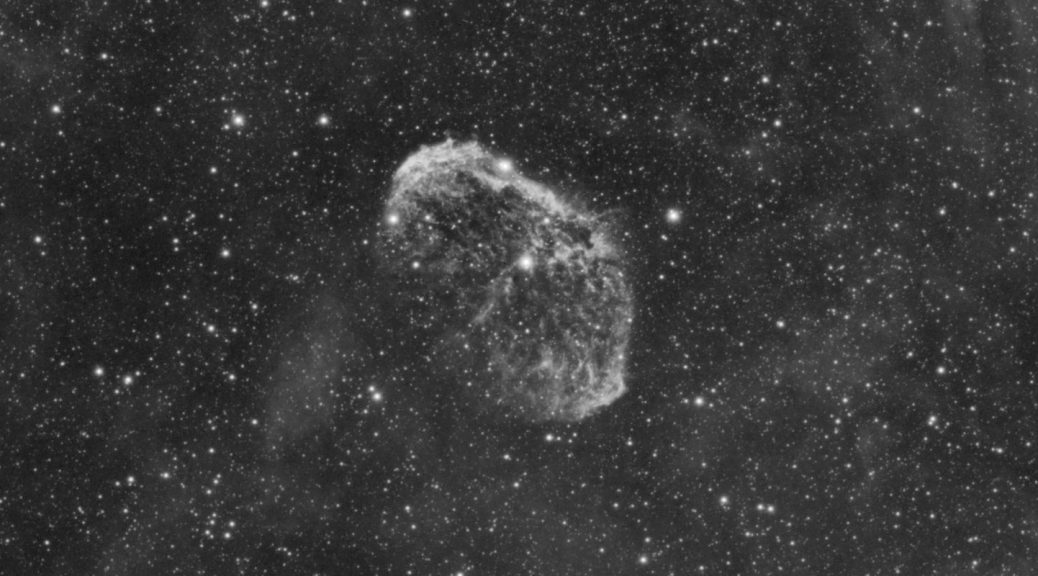 Two nights of H-Alpha deep-sky imaging recently and in both cases this had the advantage of allowing imaging despite a bright moon being present.

This was also the first time I got to use a new adaptor which connects the threaded drawtube of the FLT110 to the corrector/reducer. This appears to have reduced the amount of vignetting present and potentially dealt with a source of internal reflections, but more importantly it has eliminated a potential source of flexture by removing the 2″ nosepiece from the imaging train. 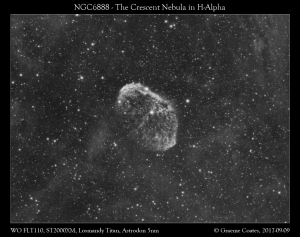 The first image is of the Crescent Nebula (NGC6888) in Cygnus (image centered at RA 20h 12m 08s, Dec +38° 19′ 44″). The Crescent is an example of a Wolf Rayet nebula – the bright star HD192163 (also WR136, centre) is a massive star nearing the end of its short life. When becoming a red supergiant several hundred thousand years ago, it blasted away a shell of material weighing about 5 times the mass of our sun. This shell of material is impacted by the fast stellar wind, and excited by X-rays from the star’s surface, causing the glowing shell of gas we see today.

The image above consists of 11 x 20min exposures taken on the night of the 8th/9th September 2017, using an ST2000XM, WO FLT110 at f5.6 and an Astrodon HA filter. These were all taken with the moon at ~85%, which shows that the H-Alpha filter did a great job of filtering out the unwanted moonlight, and letting the required wavelengths pass. 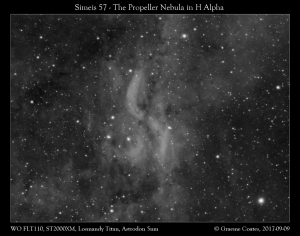 The second image is another region in Cygnus containing Simeis 57, the Propeller Nebula (image centred at RA 20h 16m 05s,
Dec +43° 41′ 05″). This is often mislabelled as DWB111, whereas that is only the southern (lower) half of the “propeller” (the other half is DWB119). Not a lot is known about the nebula – there isn’t a definitive distance, though it’s suspected that it is reasonably nearby, and it’s somewhat odd that given it’s distinctive shape and the fact it is reasonably bright in comparison to the surroundings, that it wasn’t included on other catalogues such as Sharpless-2.

This image was 3h20min total (10x20min subexposures) with the same equipment as above taken on 10th/11th September 2017. These again were taken with the moon at ~75% full.  This could probably do with more exposure to help reduce the noise in the fainter regions (which are a bit marginal here), but cloud stopped play in the early morning for this one.

A Crescent and A Propeller by Graeme Coates is licensed under a Creative Commons Attribution-NonCommercial-ShareAlike 4.0 International License.

2 thoughts on “A Crescent and A Propeller”