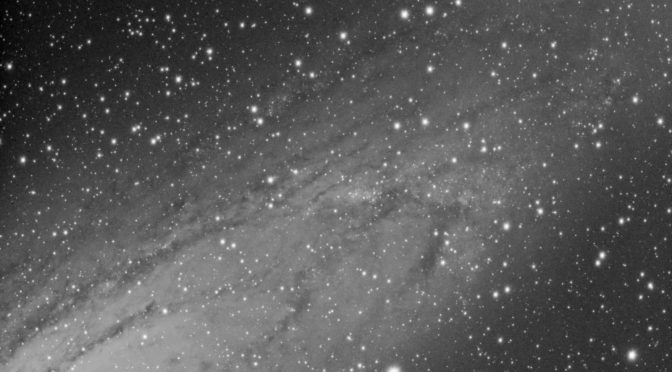 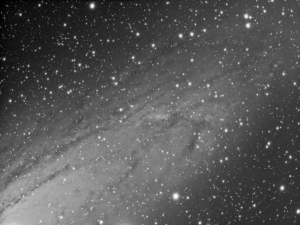 Presented here is a bit of a “nonsense image” of the Andromeda Galaxy, M31, that I grabbed early in the evening of the 22nd Jan 2017. This was a quick run, mainly while I was waiting for another target to clear the tree near my observatory…!

However, even in an image like this, which only consists of 14x5min exposures through a luminance filter, there is lots to be explored – first it gives me a good idea about future plans for a mosaic (though this will have to wait until the autumn now, and may be a major undertaking…). It also gives a good view of NGC 206, which is a bright star cloud in M31, and I plan to image this alone at longer focal lengths later on. Also, it allows me to explore objects in the Bologna Catalogue 1. 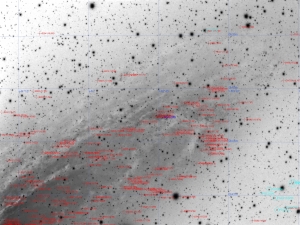 This catalogue  is not one that comes immediately to mind when talking about deep-sky objects – but it is a very specialised list describing globular clusters (GCs), candidate GCs and previous candidate GCs in M31. The up to date version of the catalogue is freely available on the Bologna Catalogue website and can be downloaded, manipulated and used as a source of information for the Annotate script in Pixinsight. Presented here in negative format is the south west region of M31, with overlaid markers for the confirmed GCs in the Bologna Catalogue v.5 (with associated V magnitudes) in red, as well as a few small PGC galaxies that loiter in the field marked in light blue. There are 181 marked objects alone in this field – most of which have been successfully captured using just a small 4 1/2″ refractor!

M31, NGC206 and the Bologna Catalogue by Graeme Coates is licensed under a Creative Commons Attribution-NonCommercial-ShareAlike 4.0 International License.

One thought on “M31, NGC206 and the Bologna Catalogue”