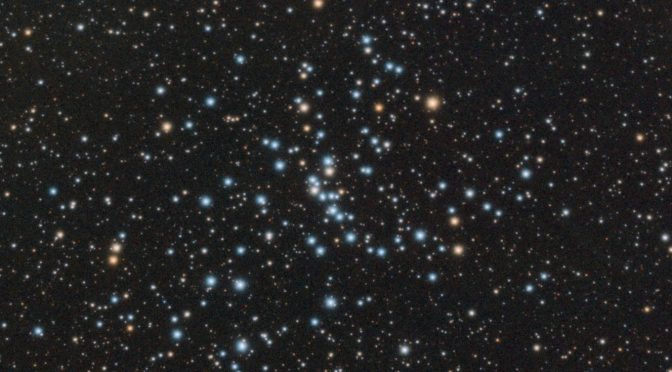 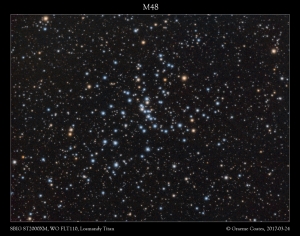 Faintly visible to the naked eye, M48 is a large open cluster in the sprawling constellation of Hydra, the Water Snake. This was originally one of the “missing” Messier objects – Charles Messier catalogued this object some 5 degrees off in declination, but this cluster was independently observed by Caroline Herschel in 1783 – the connection between the two only being made some 150 years later than Messier’s original observation.

Interestingly, in this image, there is a hint of a nebular structure just to the right (west) of the cluster (about 75% of the way across the frame as shown). It’s hard to see if this is real, or an artefact due to inaccurate flat reduction/reflection – the only way to prove this is by taking deeper exposures, and moving the scope around to ensure no systematic errors. Given the poor weather prior to taking this image, it seems unlikely to happen in the near future!

Images were acquired on 24th March 2017 from West Oxfordshire, using an ST-2000XM through a WO FLT110 on a Losmandy Titan. Exposures were R:G:B = 90:70:70 in 5 min subs, with reduction and processing in Pixinsight and Photoshop.