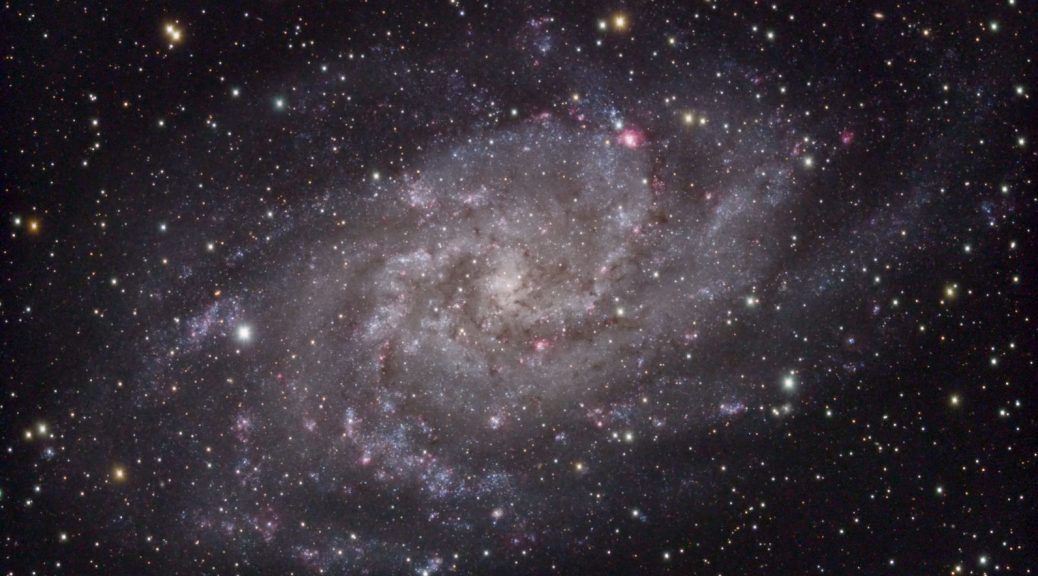 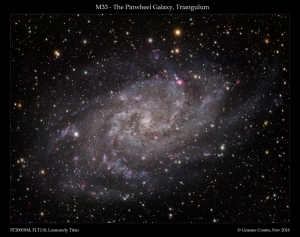 Messier 33 is a spiral galaxy in the constellation of Triangulum, and is sometimes called the Pinwheel  Galaxy, a name it shares with M101, It is the third largest member of the Local Group of galaxies with a diameter of about 60,000 light years; the two larger members being our Milky Way and the Andromeda Galaxy (M31). There is suggestion that M33 and Andromeda have experienced an encounter at some point in the past (and will do again in the future!).

There are lots of H-II star forming regions within M33 that are visible as pinkish areas of hydrogen emission in the spiral arms. The largest of these is NGC604 which was catalogued independently of the galaxy core by William Herschel. This area is probably very similar to the Orion Nebula in many ways, and can be found to the north-east (upper-right) of the core of the galaxy (north is to the right in the images).

The images were all taken across several nights in November 2016 (7th, 28th, 29th) from West Oxfordshire with an SBIG ST-2000XM though a William Optics FLT110, all mounted on the Losmandy Titan. Exposures were as follows:

Reduction and processing performed in Pixinsight and Photoshop. The processing of this object proved tricky. The galaxy largely fills the field and leaves relatively little background to work with in running DBE processes. This left several colour casts and gradients that I needed to manually remove within Photoshop – not an easy task… 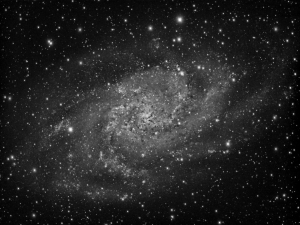 Also included here is a luminance only channel using the L channel data, that has been processed using HDR Multiscale Transform, Local Histogram Equalization and TGV Denoise to reveal to a greater extent the structure of the galaxy – in many ways this might be regarded as “over-processed”, but an interesting take on the galaxy nevertheless.

M33 – The Triangulum Galaxy by Graeme Coates is licensed under a Creative Commons Attribution-NonCommercial-ShareAlike 4.0 International License.