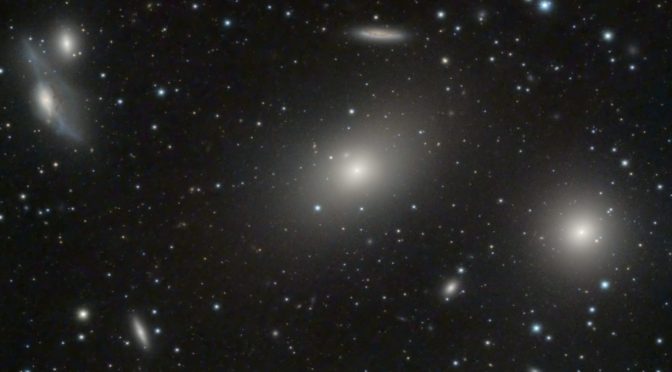 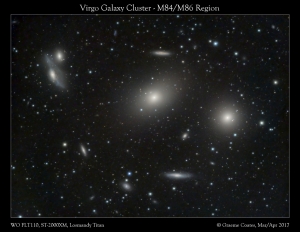 The Virgo Galaxy cluster is a large nearby cluster of galaxies, that spans over 8 degrees of sky, and consists of over 1300 member galaxies. The cluster forms part of the Virgo super-cluster, of which the Local Group (with the Milky Way, M31, and M33) is an outlying member.

The cluster is approximately 50MLy distant, and is comprised of three main clumps, with the image here displaying the M86 “subclump” of the “Virgo A” clump. M87 (Virgo A itself), is just off the frame to the lower left. The three largest galaxies in the image above are M86 (centre), M84 (right) and the interacting pair NGC 4435/4438 (left – otherwise known as “The Eyes”). These galaxies make up part of the famous “Markarian’s Chain” which is a series of bright galaxies extending off frame to the top left (north-east). 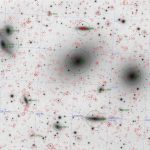 Also present in the image above are NGCs 4387, 4388, 4402, 4407, 4425, as well as several IC objects (including the odd blue irregular galaxy IC3355 at the top of the frame) and countless faint objects – some of which are highlighted in the annotated reversed image with galaxies highlighted from the SDSSR8 catalogue down to magnitude 20.

“The Eyes” make an interesting pair – the smaller (NGC4435) is a barred lenticular galaxy (an intermediate between an elliptical and spiral). The larger NGC4438 is the most distorted of all galaxies in the cluster – with much of the disruption apparently caused by a past interaction with NGC4435. The detection of gas linking NGC4438 and M86 suggests that at some point all three galaxies have had past interactions. Additionally, there is some question as to whether the core of NGC4438 is powered by starburst (which may be as a result of the previous interactions), or whether it is home to an Active Galactic Nucleus, powered by a black hole.

Data was taken over several nights during March and April 2017 from West Oxfordshire, UK using a WO FLT110, FLAT4 reducer, ST-200XM and Losmandy Titan. LRGB exposures were 240 (24x10min) : 75: 70 :70 (RGB in 5 min subs, 2×2 bin). Unfortunately, the flats didn’t reduce well here, so there was quite a bit of work in trying to eliminate gradients across the image – this may have restricted a little what I was able to pull out of the image data.